From Della - The Las Vegas buying trip with Jan - new town, new adventure, different sort of show - I'm game. As we scurried off the plane at 8:30 a.m., the rows of slot machines dinged and chimed, looking just like an airport…except. We took a fast taxi to the Off Price show at the Sands. The cab driver let us off in front of the convention hall, and the drive seemed to miss "The Strip." I was in Vegas, but apart from the airport slots I hadn't seen a thing that was too far from norm. The Off Price show is a smaller show where Jan often cherry picks to find great deals to bring into the store. It is very hit and miss.

Other clothing shows are often bright and shiny, with beautiful displays, lively music, and candy or treats on the ordering tables. There were no candies or treats. The booths were stale and often displayed on grids or lattice. Many of the reps at the booths were smarmy and pushy. A few of the strange things seen: a 3 piece camouflage suit to insure the wearer looks exactly like a giant bush, $19.99, a sea of bootie mannequins (emphasis on the enlarged bootie) with 782 shades of jeggings, and super sized bling in handbags, jewels, hats, scarves, and shoes. We found a few good lines from lovely people, mostly in Indian summer dresses, and separates from Nepal.

Okay, now I must write about the casino and the over the top glitz and glam. I was curious about the allure of Vegas. My hotel room was basically larger than my house. The casino was filled with people smoking, yet there was no hint of smoke. The buffet folks were stacking crab legs on top of crab legs on 3 plates at a time. Everywhere I looked people had four feet long plastic light up drink cups full of booze. The cocktail waitresses had uniforms made of four quilting squares. . .oh, and some fishnet stockings. Everything was extreme, but too much. It was plastic and surreal. It felt like a facade that would at any moment come crashing down.

I didn't see any hookers, but was handed a card that let me know that I could get one in less than 20 minutes. We saw an Atlantis-based robot show in the middle of one of the casinos with fire and water and sounds of thunder; it was 5 minutes of my life I can never get back. People flocked and took pictures. It was like Disneyland. It all made me feel crazy, but like a crazy that you could wear a strange hat, puke in a corner, do jumping jacks or flips, or kiss a stranger - anything would be unnoticed and/or acceptable within the realm of crazy. I suppose there is a freedom to that for some.

Jan was focused in her buying-for-the-store sort of way. She could look past all the strangeness, and settle into the work at hand. I tried to follow her lead. The show at our hotel, the WWIN show, was more like the shiny clothing shows I have seen. The first day the buyers lined up with their name badges, notebooks, and comfortable shoes (this is a clear sign of a veteran versus novice) and attacked the bagels and orange juice as if soon they would be going off to battle.

The doors opened and we began. Jan talked about walking the entire show first, just to keep an idea of what was out there, jotting notes on places to return. This initial walk thru is also a time to say hello to all the owners and reps with whom friendships have developed, and many introductions were made to me. I talk to many of these people on the phone, and to see a face and shake a hand is delightful. Some have been doing this since Jan opened the store back in 1984; those are long and important relationships. We found a few new lines, chose new spring, summer, and fall looks from some of our favorites, and tried to balance all of this with store space and finances.

It was a good trip. Jan and I work together most days, but there is always a need to talk about future events or choices for the store that need extra time. These trips are good for that. I loved the experience of Vegas, just to have had it. As the sun came up, the mountains in the distance from my hotel room, beyond the lights and slot machines, were the most beautiful I've seen. Those would something to return for. . .oh, and maybe the crab legs.

Why don't we have a:

Coats and Sweaters Arriving Each Day

Our annual coat and sweater drive for Rose Brooks Center starts small with neighbors and friends bringing in donations. 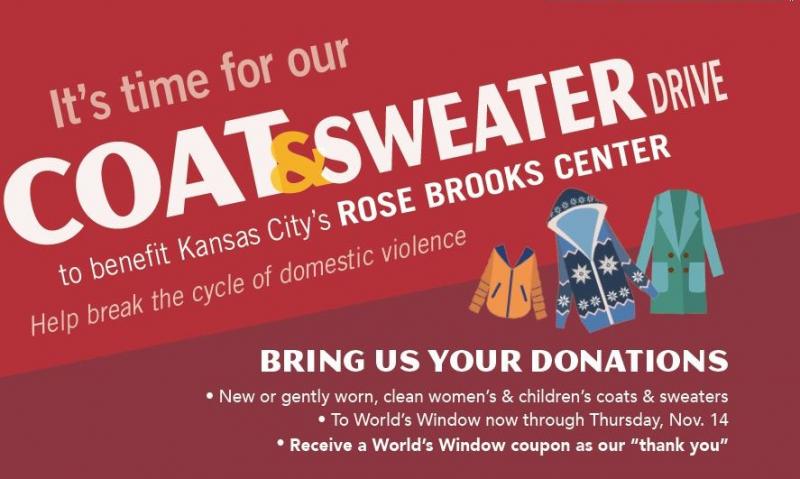