In today’s climate of nationalism and a pervasive sentiment of “otherness” towards groups outside of our own cultural or political views, those that inspire compassion in our daily awareness and most importantly actions are greatly needed. In much of the Western world this compassion is symbolized by the Virgin Mary of Christianity.

In Eastern Asia Guanyin or Guan Yin (also spelled Kwan Yin) watches over Buddhists, Hindus, Taoists, and Christians alike, as a bodhisattva or Goddess of mercy and compassion. Bodhisattvas are enlightened beings who are destined to become Buddha, but postpone that final state in order to help humanity. In its proper Chinese form her name is Guanshiyin, which translated means, “(The One Who) Perceives the Sound of the World” (Guan Yin) or “She who harkens to the cries of the world.” (Guan-Yin: Goddess of the Compassion and Mercy) 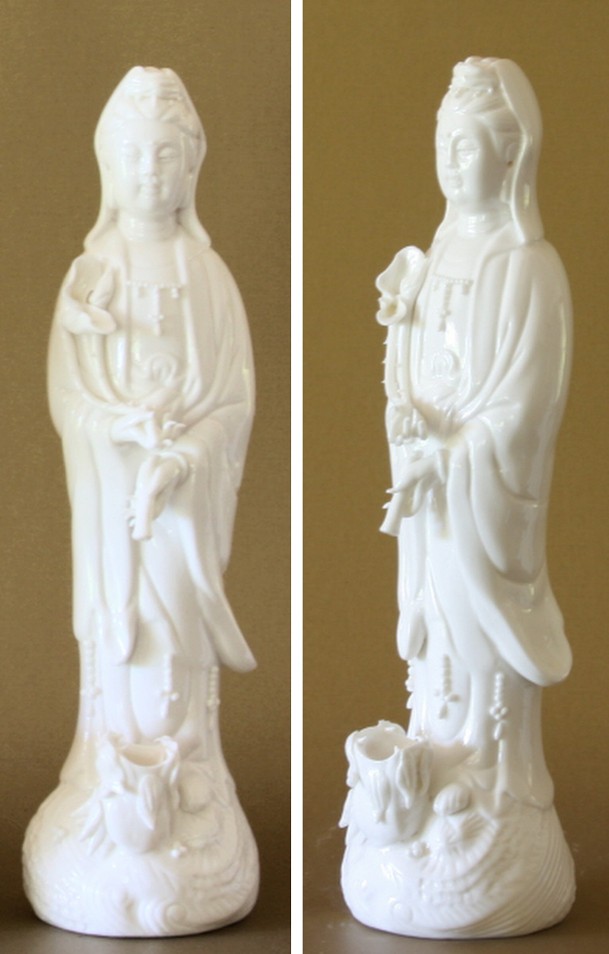 (In the Chinese representation above she is holding a willow branch from which she sprinkles the nectar of compassion and wisdom. The dragon she rides is symbolic in Buddhism of Anger, Greed, and Delusion the Three Poisons or Three Unwholesome Roots of Humanity.)

Guan Yin knew suffering during her first life on earth. Her first form was that of the male Bodhisattva Avalokiteshvara, whose name means, “Lord who looks down with compassion.” He devoted his life to help those whose souls would be lost to be reborn into a better life on their journey to enlightenment.

Endless streams of lost souls overwhelmed him with their anguish and his despair was so great that he shattered into a thousand pieces. From the pieces he was reformed as a goddess and was given a thousand arms and eyes in the palms of her hands so she could always see the people’s distress and be able to encircle them with compassion and mercy. She was given the choice of remaining in heaven; however she chose to come back to earth to continue her work of compassion. She has been reincarnated with many names in many cultures and continues to go wherever humanity needs her wisdom.

My own search for inspiration has been one of many twists and turns. I was not raised in a religious household, but the watchful eye of my Later Day Saint Grandmother was often present and brought more than a little anxiety to childhood. I never understood this idea of faith and believing so deeply in that which we cannot see or has no empirical evidence.

As I’ve experienced more in life I understand being drawn to belief and have come to trust my intuitions about the world. For me the idea of faith lies in my love of the Moon watching over me at night as a protector and confidant. The moon shifts the tides and rhythms of our earthly bodies, so why not the path of our soul. Guan Yin and the Blessed Virgin also represent this idea of having someone up there on your side, looking out for you.

Whether your own inspiration for compassion comes from Quan Yin, the Virgin Mary, the Moon, or your grandmother, the important lesson is to bring compassion to light the dark parts of your journey and to lighten the souls you meet along your path.

Gift cards are always the right gift. Purchase them on-line or in-store.

Like so many other companies and organizations, we've spent the last two weeks watching, listening, and reflecting on the state of our city and our country, and our place in all of it.

Rolling out the Welcome Mat

After almost two months of having our store closed in Brookside, we will re-open Friday, May 15 from 11 am to 5 pm.